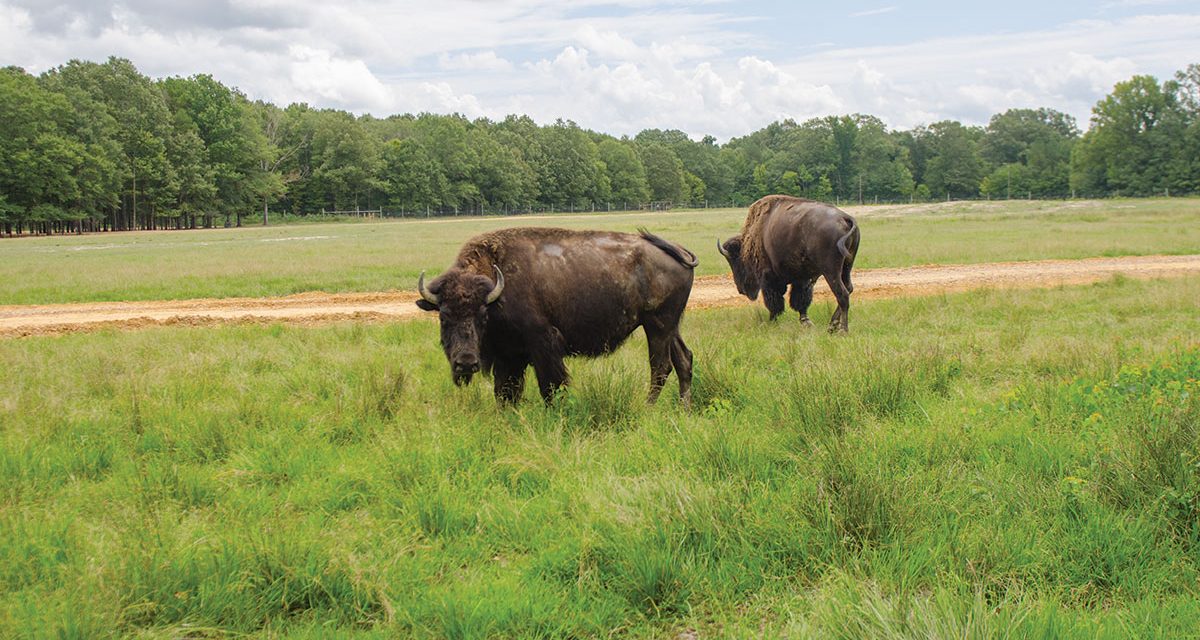 Life at McClain, a sprawling resort comprised of 2,000 acres of green pastures, nine lakes, exotic animals, a functioning garden and 17 beehives, a growing herd of cattle, a general store, outfitters, bar, buffet, safari, steakhouse, farmer’s market, bakery, and a takery is always in a state of movement.

With only a portion of the day-to-day responsibilities like picking produce, conducting safari tours, baking homemade goods, stocking the general store with locally made merchandise, cooking food, taking care of the exotic animals, hosting events and weddings, and even holding “Roo,” McClain’s mascot and farmer’s market greeter, one thing is for sure, there’s always something to do for the 240 employees that call McClain home.

At the helm of it all are owners Buddy and Joni McClain.

THE BIRTH OF A VISION
The McClain story began 11 years ago when Buddy and Joni got married at what was then known as Luckett Lodge. Although they were just customers at the time, the lodge became a special place to them as they began their journey as husband and wife. Fast forward a few years later, and Buddy got wind one morning that Luckett Lodge was for sale.

“I just knew I shouldn’t have told Joni at first,” said Buddy. “She immediately got so excited and wanted to buy it. I knew that was the end of it, so we bought the initial lodge and expanded into additional surrounding acreage in 2012. The rest, I guess you could say, is history.”

As they began working on the property, Buddy noticed there was no place nearby for him or his employees to pick up a biscuit or a bologna sandwich without having to drive to town.  From this initial thought, the general store, farmer’s market, bakery, takery, buffet, and steakhouse would ultimately be created. The McClain’s knew that, like many things in the South, experiences and memories often begin with good food.

“Good quality food is important to us here. It’s part of the whole McClain experience,” said Buddy. “Whether that’s handmade buns for our burgers, taking produce and meat straight from our garden and butcher shop to fill our buffet and steakhouse, or even using the pecan wood from our pecan trees to infuse the pecan flavor into our grills, serving homemade food that’s as pure as can be and tastes good is important to us. Incredibly labor intensive, but important.”

To both Buddy and Joni, family is also of equal importance. The vision of having a centralized, one-stop-shop, where families could get outdoors and spend the day together then shop and eat a meal – or even pick up something to-go for supper from their takery – was ultimately the goal.

“There aren’t many things like this for families to do together, and any way that we can be a bridge that connects families to each other and fun experiences to memories, is an honor to us,” said Joni. “McClain was made for families: to be a family business, a place that attracts families and friends to spend time together, and to treat our employees like they are a part of our family.”

CREATING THE EXPERIENCE
As the vision for McClain turned into a reality, Joni’s experience in marketing and creating lasting memories that came with owning a successful event planning business prior merged seamlessly with Buddy’s experience in managing businesses and bringing in quality staff. As both of their passions came together, McClain blossomed into a truly unique Southern experience with a specific niche.

“Our animals are who we are, the rest is extra,” said Buddy. “The animals are our nucleus and they are the center of the ‘McClain Experience’ because the other businesses we have built are merely meant to complement them.”

With tours that run multiple times a week, the safari is sure to excite both the young and the young at heart. Where else could you spend the day feeding buffalo, getting close enough to touch the horns of cattle, seeing zebras, or holding goats and more at the petting zoo? And that barely scratches the surface of what the safari holds for those who try it. But don’t just take our word for it, ask the over 700 people who participated in the safari just last weekend.

Now dubbed as event central, McClain offers 26 bedrooms within their cabins and lodge and has the ability to cater, bake, and serve beverages at various events onsite whether for weddings, corporate events, family reunions, birthday parties and more.

While some might think that the idea of opening seven businesses in one day – and adding more since – sounds a little daunting, the McClain’s have no plans to slow down.

Some of the new things coming are plans to expand their cattle, elk, and bison herds; having a processing plant; offering camel rides for children; and continuing to become a premium destination for local and traveling guests.

“At first it was a lot just getting it open and going, even down to all the point of sale systems for inventory,” said Buddy. “Now we are really focusing on honing in and doing what we do even better. There are so many things we want to grow into, and we will, but we want to do it well.”

AT THE HEART OF IT ALL
If you’ve walked onsite at McClain and felt your jaw drop, you are one of many. What started with just two people and a vision has turned into a truly unique Mississippi destination. If it is true that having the ability to take advantage of opportunity is a learned skill, the McClain’s certainly have it.

Sitting across the table, talking with Buddy and Joni, you are greeted by Buddy’s contagious smile, and the love the McClain’s have for this place– for each other– resonates.

Buddy’s eyes light up when he talks about Joni and how she takes the time to greet each person who walks in or even and learn their names. According to Buddy, Joni can just about consistently do it all.

“Of all the things that Joni does so well, and there are so many, the thing that speaks to me is she never says no to any of my crazy ideas or dismisses them,” said Buddy. “To have a spouse that believes in you and cheers you on is a great thing.”

And for Joni, the admiration is mutual.

“I respect Buddy more than I can ever say, on more levels than one,” said Joni. “He has no fear when it comes to taking risks and business, and that amazes me.”

While Buddy is the head of the operation, Joni is the heart. With these two parts equally working together, as if working inside a body to keep it thriving, Buddy and Joni have created a dynasty at McClain, though they are too humble to say so themselves.

“Both Joni and I work 100 hours a week, every week, and we still love it. This place is important to us. Our name is on it; it’s where our story together began,” said Buddy. “It’s been months and years of hard work, but it’s been a ball. And from our family to yours, we hope you will join us.” 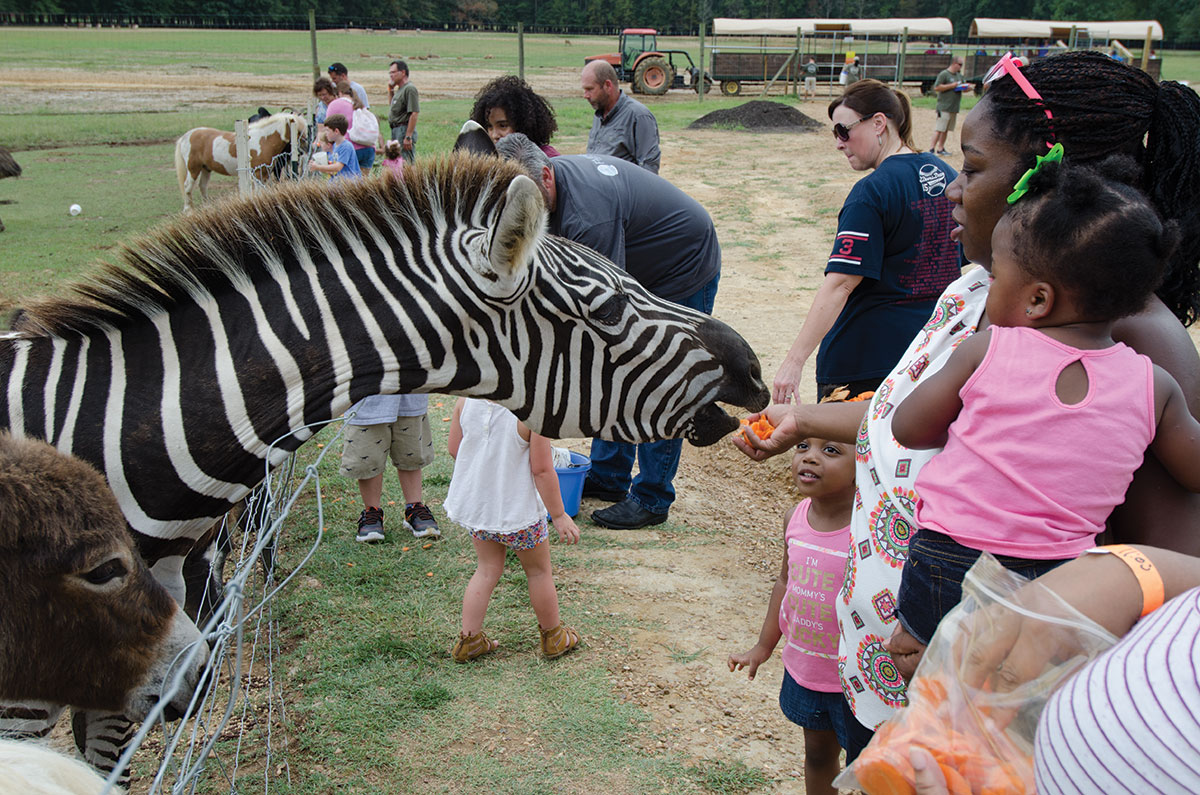 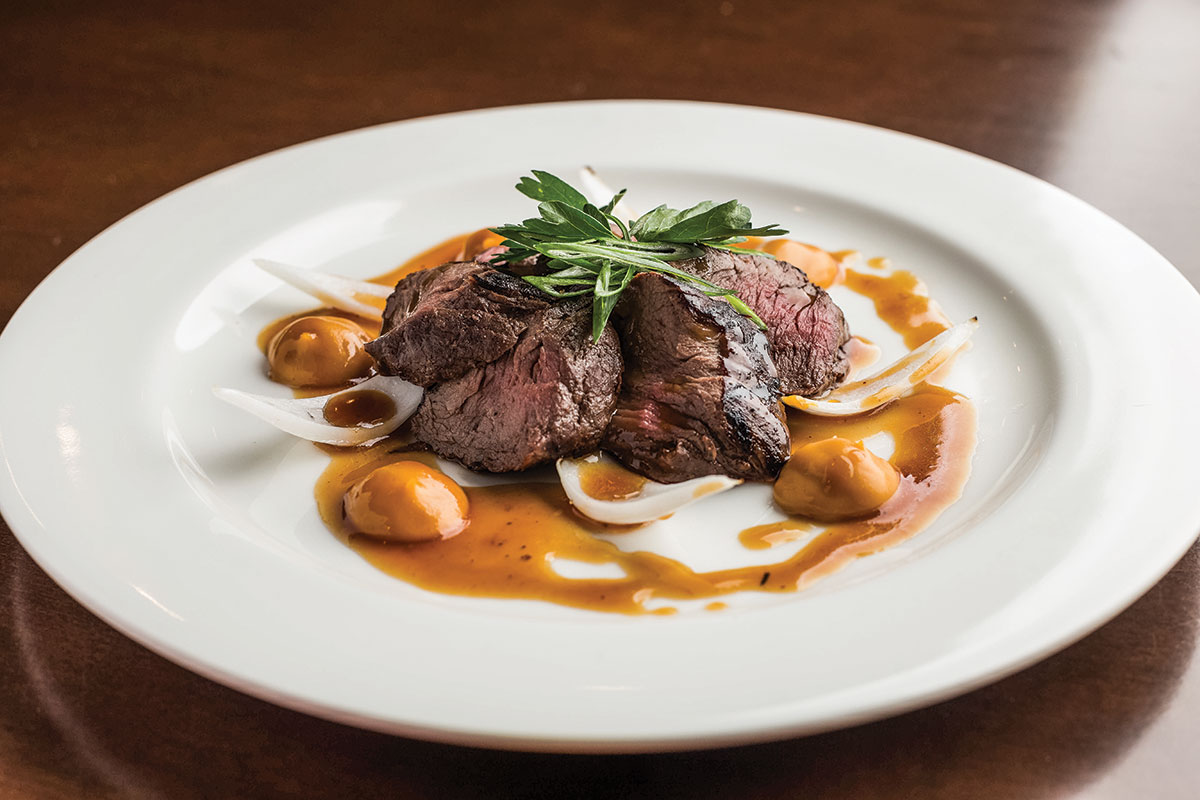 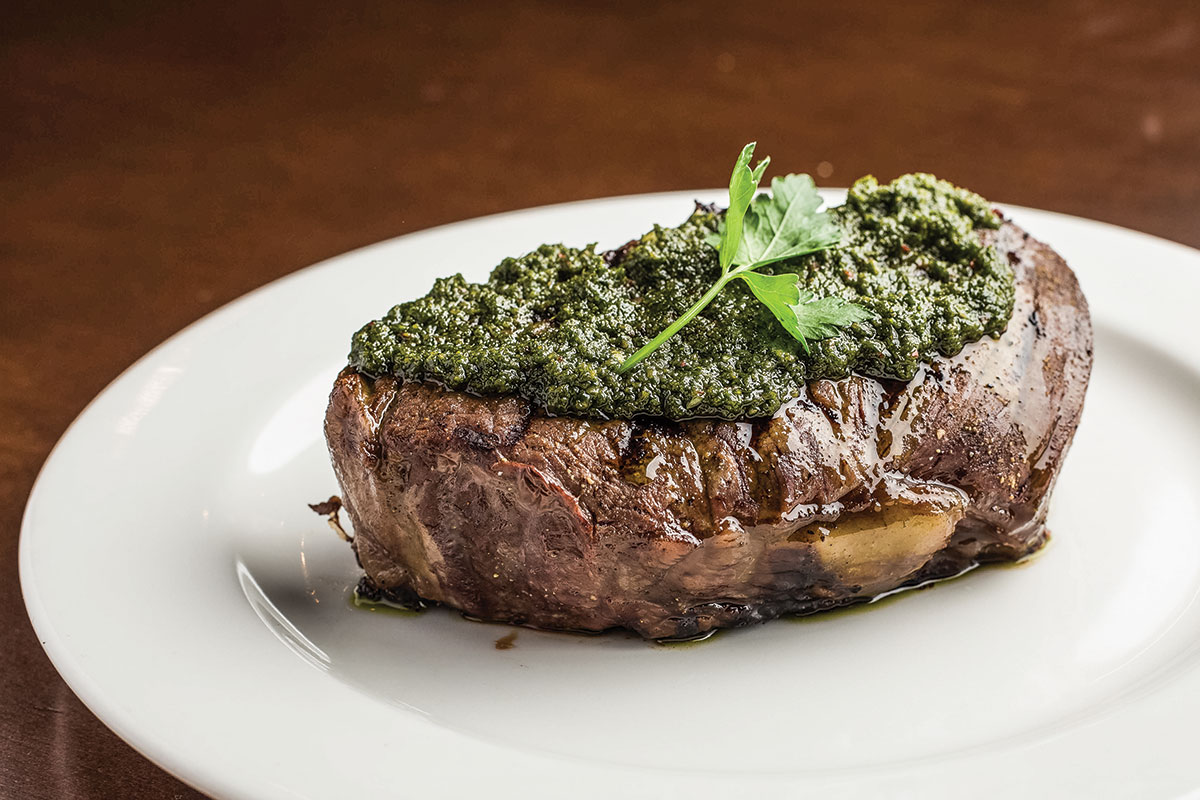 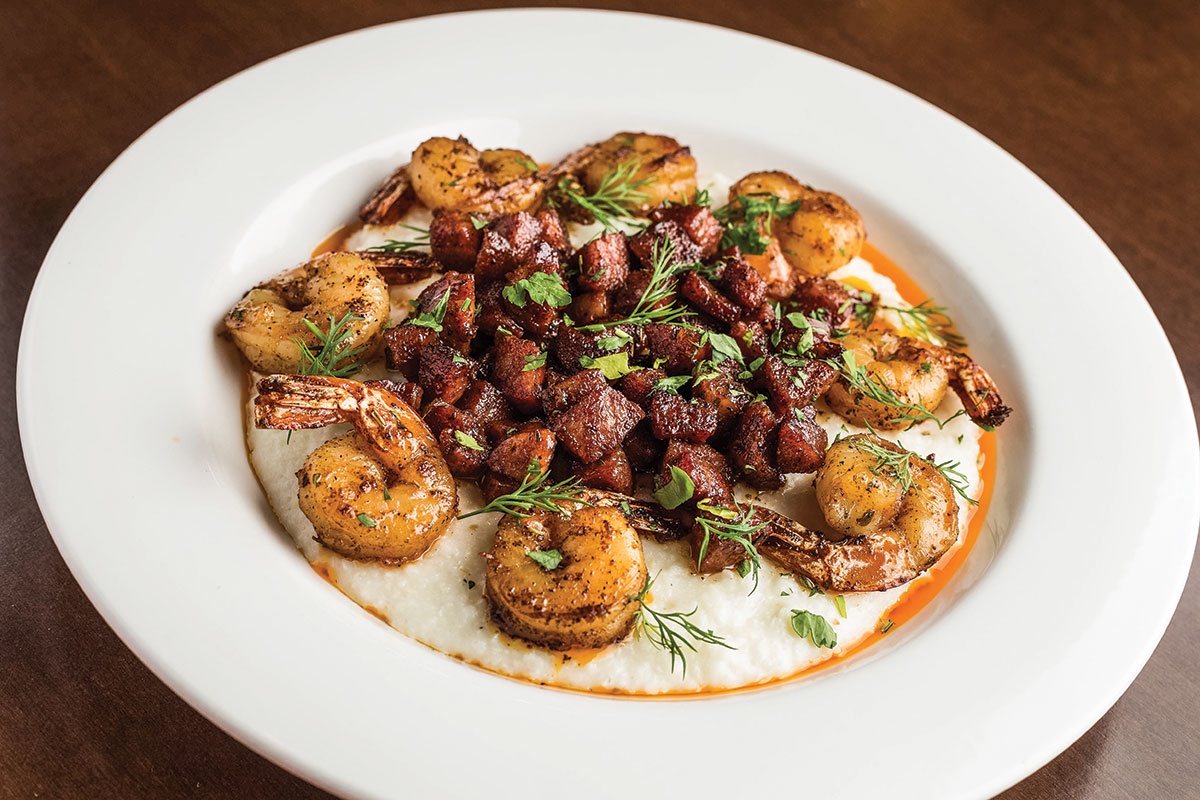 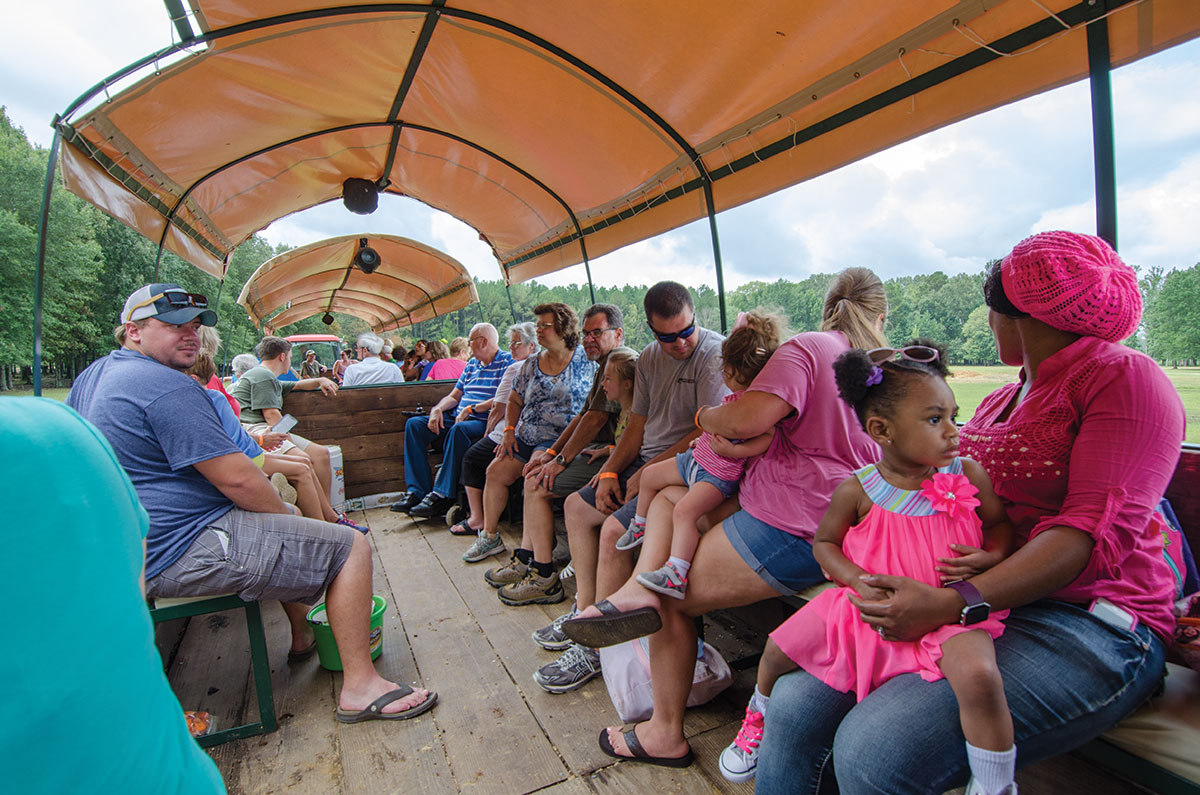 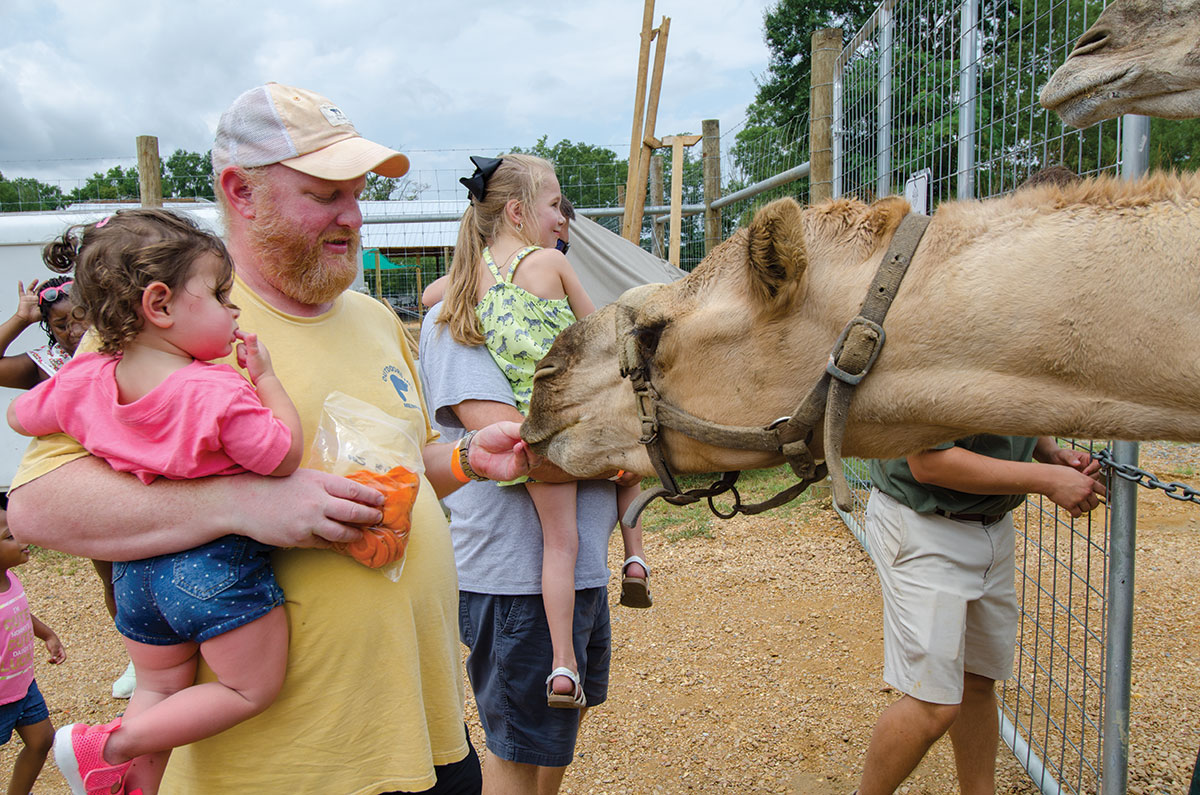