The delicate petals of a Longleaf Lobelia. The tall, hollow leaves of the carnivorous Sweet Pitcher Plant. And the perfectly imperfect Common Blue Violet. As wildflowers, they decorate the landscape just as a string of pearls decorates a socialite. Yet each unique plant is as different from one another as a German shepherd is to a Chihuahua. It’s those unique qualities that attract artist Trailer McQuilkin to create botanical studies that are so realistic, a trained botanist may have a hard time distinguishing art from reality.

McQuilkin may well be the only artist in the world who creates realistic-looking sculptures of wildflowers using thin copper sheets, copper wire, metal primer, oil paints, and found objects from nature. His career as an artist progressed organically, so to speak, as McQuilkin never set out to do what he’s doing, yet he can’t imagine doing anything else. “I’m unhireable to do anything else!”

The son of a Navy pilot, McQuilkin grew up spending a few years in one place before moving on to the next, mostly along the East Coast. “We landed in Virginia Beach, and I became one of the first surfers there,” McQuilkin recalls. “All I cared about was surfing.” When it came time to go to college, he looked at the schools in Louisiana, where the family had kept its residency. “My mother was from New Orleans, and I spent each Christmas at my grandparents’ home there. I went to LSU for the in-state tuition, and I majored in business, which I hated. My real education came from hanging out in the French Quarter in New Orleans. “I met painters, sculptors, writers and other creatives there. My brother and friend, David Baker, were both graphic designers, and I loved what they did. I ended up in New Orleans and tried to figure out how to be in art.”

He got his break when he was hired to work for a photographer in 1967. “My very first job was at one of the first Jazz Festivals at the auditorium in New Orleans. Count Basie and other characters where there.” The photographer moved to Houston, and McQuilkin decided to hang back in New Orleans. He thought he could hone his art skills by working with other artists, including Joey Bonhage, with whom he’d gotten his first experience in creating metal plant art. “He gave me a pair of metal shears and some tin discs and had me cut out 50 pieces using a pattern. I did that for six weeks. After that short apprenticeship, if you can call it that, I decided to make my own plant sculptures. I created some pretty crude flowers and although I had no painting experience, I tried my hand at painting them. I showed them to my aunt who owned a gift shop, and she bought all five pieces I had made for $10 each. It wasn’t long before she called and told me she had sold them all.”

Realizing he was on to something, McQuilkin began teaching himself how to paint. Within a year and a half his work was in a few galleries. “I did a garden show in New Orleans and the social editor of the Times-Picayune, a friend of my mother’s, saw it and said she knew someone in Baltimore. I had sold about 70% of my work in the garden show, so I took what I had left to Baltimore. While we were up there, my girlfriend (now my wife) and I went to New York to visit my brother. While there, I met a buyer from a fancy dress shop who said I needed to go see Gene Moore, who had been the window designer at Tiffany’s since the 1940s. I called his office and he asked me if I had an appointment. When I told him I didn’t and that I was leaving the next day, he asked me where I was from. Once I told him I was from New Orleans, he softened and said he was from Birmingham and he hadn’t spoken to a Southerner in so long. He said, ‘Come on up,’ so I did.”

Moore took one look at McQuilkin’s work and asked if he’d like to do the Easter window displays for Tiffany’s. Of course, he did. A year later, Moore had special fountains made in Italy and wanted McQuilkin to create some trees to go with them. On the way back from New York, McQuilkin stopped in Pennsylvania where a friend was opening an art gallery. “I left him five or six pieces, and by the time I got back to New Orleans, he had sold them all. The gallery had not even opened yet!”

While in Pennsylvania, McQuilkin met Frank Fowler, who represented artist Andrew Wyeth. “He asked if I could go see him.” He wanted to commission McQuilkin to make a Christmas present for Wyeth. “Andrew Wyeth summered in Maine, and Frank wanted me to make a Maine blueberry plant. I had to work from books, without seeing the actual plant, which was difficult.”

Time passed and America’s Bicentennial was coming up in 1976. McQuilkin heard that each state was doing a project that related to that state, and McQuilkin approached Edith Stern, a New Orleans author, philanthropist about it. When she met him, Stern said to forget the Bicentennial and she asked McQuilkin to do a collection for Longue Vue Gardens in New Orleans, where she lived. She wanted him to create a collection of wildflowers found throughout the city and gardens. “That’s when I transitioned from using books to working from real plants. I needed the three-dimensional aspect to create a three-dimensional product. The petals of a flower look different when looking down at them than they do from underneath.” That commission took him two and a half years, as it takes at least two months to complete one piece. There are 20 pieces in that collection.

McQuilkin’s work places the flowers he makes in their natural habitat. While the stems, leaves and flowers are all made of copper, he will use some found objects from the plant’s habitat to create a sense of realism. It’s difficult to tell when the natural elements end and the art begins. On the ground around the flower’s stem there may be leaves from the tree canopy that would be above it, and it’s not unusual to see small bug bites and other blemishes on the leaves. “People love the bug bites,” McQuilkin laughs. His techniques, all self-taught, include cutting, soldering, incising and painting.

As his work became more intricate and accurate, McQuilkin began working with botanists to make sure each detail was correct. His work became more well-known in botanical garden circles and he was asked to do a fundraising show for the Atlanta Botanical Gardens, which were under construction at the time. He was approached by Georgia flower enthusiast and philanthropist Deen Day Sanders about creating a collection for her corporation. McQuilkin then made a proposal to Sanders about doing a collection of endangered species in Georgia. She agreed, and then donated the collection of 42 pieces to Callaway Gardens where it is on display today, the largest collection he has done to date.

McQuilkin has an appreciation for plants that he never had growing up. “All I cared about was surfing. I hardly noticed plants at all.” Now he has become a conservationist of sorts. “I guess I do consider myself a conservationist. Urban development has wiped out an unbelievable number of species, and more are suffering. With the environment we now live in, with climate change and all, some of the plants we enjoy today may be the last of their kind. We are losing plants at an alarming rate. That’s what makes my work important. It may be what people in the future see instead of the real thing.” McQuilkin works closely with botanists and horticulturists. “Part of the deal in working with endangered plants is that if they let me have access to the plants, I can dig them up, do my work, then I have to replant them in the same place. That gives me a very small window in which to work – about two weeks to one month. When working on a piece, I work seven days a week, eight to twelve hours a day. Flowers are translucent in sunlight and I try to capture that glow. I try also to capture the whole life cycle of a flower, from bud to flower to seed and even the structure after a flower dies. All my pieces are life-size and as accurate as I can make them. What I see is what I strive to create.”

Inside his “dream studio” in Ocean Springs, where he now lives just down the road, McQuilkin carefully crafted each tiny petal, stamen, stigma, pistil and sepal, placing each part in place with the utmost precision and care for the show that’s up now at Brookgreen Gardens, a 9,100-acre sculpture garden and wildlife preserve located just south of Murrells Inlet in South Carolina. The show features 18 native wildflower sculptures and will be up through April 22. For more information on the show, go to http:// www.brookgreen.org/events/wildflowers-botanical-sculpture-trailer-mcquilkin.

To learn more about Trailer McQuilkin and view his online gallery of work, go to www.trailermcquilkin.com. His book, “Wildflowers,” is also available for purchase. It is a magnificent collection of photographs of public and private collections the artist has created over the past 42 years. 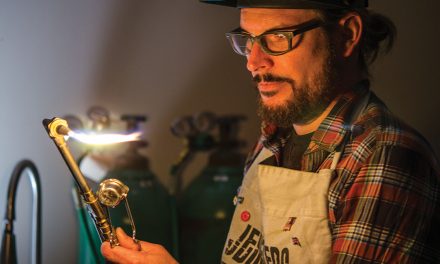